Working through iterations of type layouts for our new project for magazine layouts I've already learned a lot. I was influenced by the magazine Real Simple for my layouts and wanted to work off those. So, working through them, I ended up trying to make a logical grid, but also breaking it and making not so logical. I'm new to these layouts, but It's been fun to deal with something new and also something that is known to break the rules here and there. Here are some layouts I'm working with now: 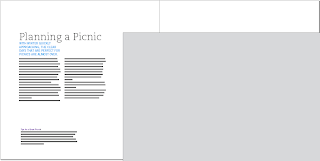 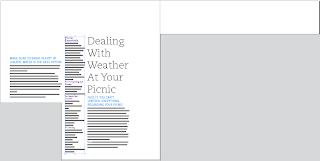 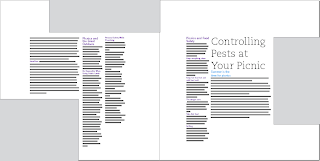 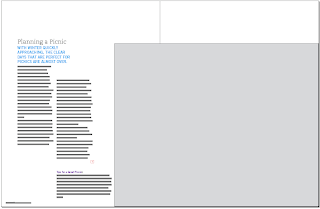 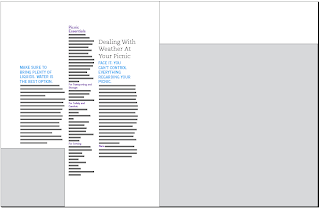 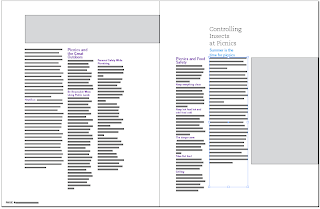 I'm going to end up working with the more square grid idea. It's 11x11. And also, I'm hoping to use my own images: 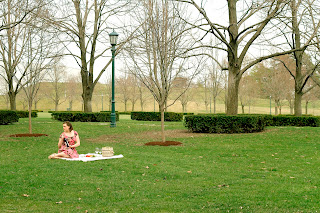 I've taken some variations of this, and just a picnic set up for my article, and possible information graphics.


I'm also planning on changing my layout a lot. Since content and making it relate is becoming a challenge for me in this assignment, I have three different articles running through the entire large article. Today, Michael asked how it relates to each other, and how it worked on a grid. Which, was hard to answer, because for some parts I pretty much disregarded my grid, and I just thought a variation of type would be clear of differentiation within content. So, going off today's crit I'm decided to change up my layout. I plan to have one introduction page with a large image, with an introduction to the first part I have. Then the next spread work as a spread that has mostly text on both pages, because with my current spreads I've been having a pretty even percentage of image and text, so changing that up would be nice. And the last spread would be half image and half text.

I'm really excited to be working with this, and I'm actually not so bummed (at least before I was) that we are using our project from Graphic Systems. I'm lucky I chose something I think is fun.
Posted by Unknown at 9:14 PM